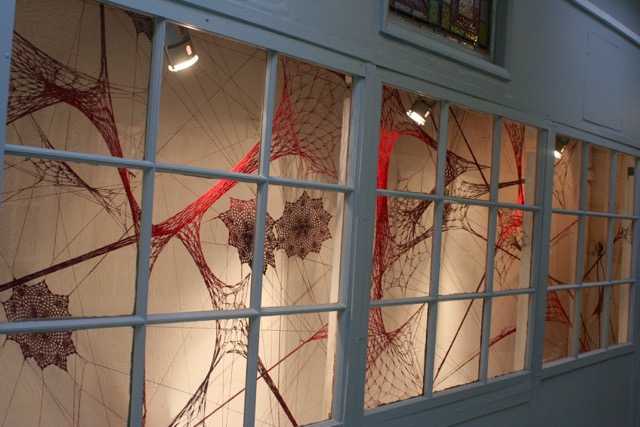 Elevating and transforming the humble domestic craft of crochet to obsessive and neurotic heights, Sara Willett has created tensions both literal and psychological as the fantastical forms fashioned from stretched shirring elastic colonise and consume the space.

This new installation created for Curious Projects evolved from her series of forest web sculptures, which she developed particularly during two residencies in China. Each piece is time-consumingly made by hand.

The installation takes its name from a statement made by the modernist critic Clement Greenberg: he describes the  ‘decorative’ as the ‘spectre that haunts’ successful modernist painting, and defined the avant-garde by means of its opposition to the kitsch.

Aesthetically drawn to 'the decorative', but also fully aware of its problematic position in contemporary art, Sara Willet is interested in exploring its position in 2015 – whether it still has the potential to be a potent or disruptive force.

As early as 1908, the architect Adolf Loos published a paper entitled ‘Ornament and Crime’ a treatise which first threw down the gauntlet.  In it, he likens decorative ornamentation to degeneracy, criminality and primitivism. This extreme and uncompromising position was rapidly embraced as an article of faith by the post WW1 avant-garde and rose swiftly to that of aesthetic orthodoxy for most of the 20th Century.

By the mid 20th century, high modernism was primarily the bastion of the white, Western male – dominant, dogmatic, hierarchical and patriarchal.  Even one of the few successful female abstract expressionist painters, Joan Mitchell, felt the need to destroy her pastel paintings stating, ‘I’m not some god damn lady painter’.  Towards the end of the 20th century, this orthodoxy began to be challenged by those who considered themselves on the margins, overlooked or undervalued. In a deliberate strategy to challenge the authority of modernism, overtly decorative/domestic elements were employed by artists in their work.  Perhaps the most famous being Judy Chicago’s large installation ‘The Dinner Party’, in which she used multiple techniques associated with feminine craft such as embroidery and hand painted china.

Sara Willett works in a variety of media, including, painting, photography, printmaking and large scale installations. She studied at Camberwell College of Art for both her BA (Painting) and MA (Fine Art). She has exhibited widely in the UK and her work is held in collections in UK, USA, Australia, Europe, Japan and China.

Her work was recently selected for the Creekside Open and in 2015 she was awarded a residency in China for the second time running.  Sara Willett lives and works in London.

About this show, she says:

"When I first visited the Curious Projects art space, I was intrigued by its unusual proportions and the sheer incongruity of its location. I’d also been impressed to see how many artists had already responded to the challenge, making thought-provoking work in the space, and so was delighted when I was invited to create a site-specific installation.

The first thing that struck me when it came to installing the piece was just how spatially deceptive this long, tall, thin space is. When I started to work in situ it took on a ‘Tardis’-like quality and I soon discovered that I would have to create far more webs than I had originally anticipated in order to have any real impact. The other challenge was the necessary relinquishing of control involved in the installation. Whereas previously I had been used to controlling every aspect of the install  - light, sound, movement through space – here I had to work with ambient light and noise from the surrounding environment. Most significantly the work had to operate purely as a spectacle behind glass - people could only observe through the barrier of glass and were unable enter or be immersed within the space.

I also responded to the strange ‘indoor/outdoor’ nature of The Labyrinth itself. An Edwardian shopping arcade, which has been in the same family for generations, The Labyrinth feels a very long way from the grand Victorian arcades of the great European cities, where Flaneurs and Dandies paraded their wealth and stylish fashions.   This space feels to me as if it is evoking a sense of ‘Ye Olde’ English village high street, cosy and familiar, it is more like a stage set than anything with grand architectural ambitions.

So it is into this world that the webs are spun. Growing behind the curious façade I hope to evoke a sense of something familiar, yet unfamiliar, something that is outgrowing its natural environment, pushing against its physical restrictions and threatening to invade the safe space beyond its boundaries."

By the time I [Sara Willett] first went to art school in 2000, post modernism was the prevailing dominant mode of thinking and therefore using the decorative in the same way did not have as much relevance. I started to think about the decorative in more abstract terms - what was its operative force and could it still be employed in an unsettling or disruptive way?

I began to look at a number of artists including Gregor Schneider, who have employed the decorative in their work to underpin an atmosphere of unease or terror within the domestic interior, often underpinned by Freudian notions of the uncanny  (from the German word unhemlick – not of the home). Freud argued that the uncanny arises when there is a return in adulthood of repressed infantile experiences, and this can often be most powerful when it takes the form of ‘the double’, unconscious repetition, or when familiar becomes unfamiliar.

With this in mind I started to make a series of installations using the familiar domestic craft of crochet, creating large scale, immersive, forest-like environments of stretched shirring elastic. I hoped to evoke a sense of the normally dull quotidian craft becoming stretched and distorted beyond recognition – loosing control and starting to break free of its natural environment,  ‘invading’ the safe domestic sphere.  I am also fascinated by scientific experiments such as ‘spiders on drugs’, where the normal genetic programming of the spider to create its webs is disrupted, with alarming results.